The day we went exploring out to the deer blind, Son also wanted to show me some round orange colored fruit he'd found in the woods. He hadn't seen it before and wasn't sure what it was. I was hoping for peaches, but knew it was the wrong time of year for those. So we walked out into the woods and found the trees. I'd taken a bucket to pick up some in case they looked good.

Some of the fruit had fallen on the ground, but most was still on the trees, on higher branches we couldn't reach. I suggested picking a few from the few lower branches to bring back to the house. Turns out we probably should have picked up the ones on the ground. The softer ones may be the better ones. The ones we brought back to the house were still hard and probably not ripe yet.

We had seen other trees out on the fence line of the county road, we just didn't know we had some back in the woods. I'll have to figure out to pick them because they're too high to reach. And how to use them. Since then I have seen them for sale in the grocery store so I guess some people find a use for them. 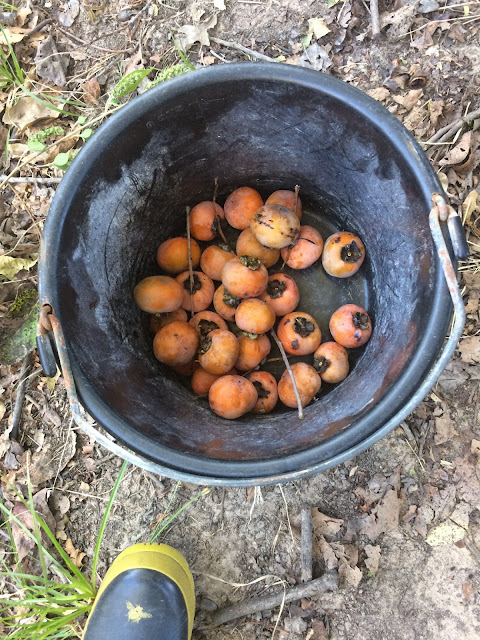 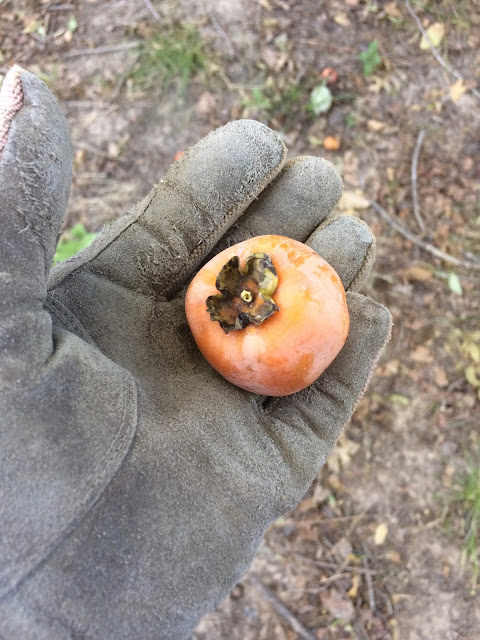 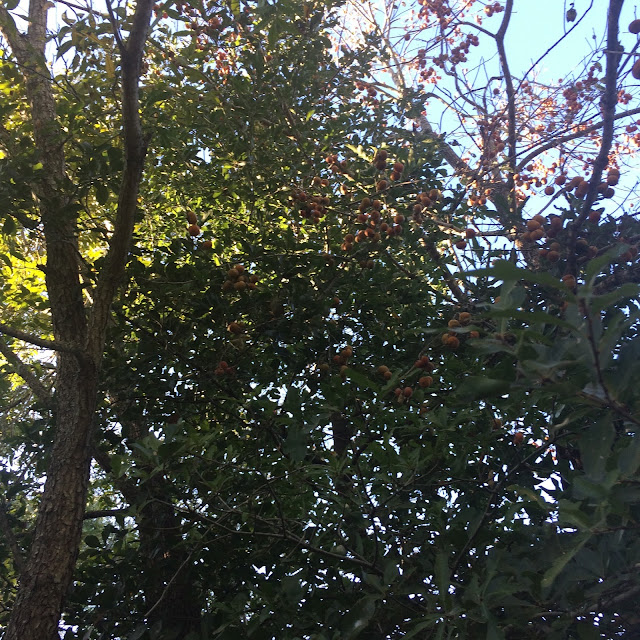 Son decided to go check out the deer blind the other day to see what the condition was. We've never used it much. In fact the only times it has been used was by Hunter when he had a deer feeder out one year. We have known that parts of the ladder are rotted. But it seems owls have set up house inside. There are two sets of sliding plexiglass windows on each side that were open. So I guess they thought it would make a nice nest.

It was a mess. Just a big mess. There were lots of feathers and owl pellets. It will need to be cleaned out.

I was interested to learn more about the pellets he found. Not poop as I had assumed, but more like fur balls.


Indigestible material left in the gizzard such as teeth, skulls, claws, and feathers are too dangerous to pass through the rest of the owl's digestive tract. To safely excrete this material, the owl's gizzard compacts it into a tight pellet that the owl regurgitates. The regurgitated pellets are known as owl pellets. -- from carolina.com

They are used by researchers and students.


The composition of an owl pellet leads to many discoveries. What the owl eats, and the biology of his digestive system, the biology of his prey, food chains and the significance of inter-relationships between species are revealed. Distinctive qualities and changes in environments and ecosystems can be monitored through owl pellet examination, sometimes revealing a species new to the area. -- from animals.mom.me

And a quick search online finds that you can buy/sell pellets for about $2 each. 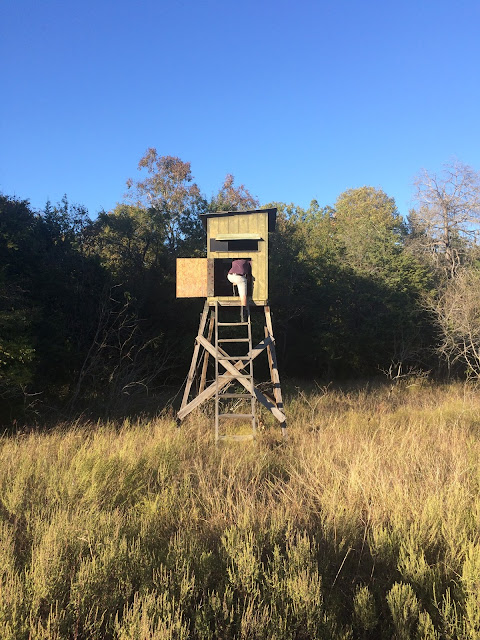 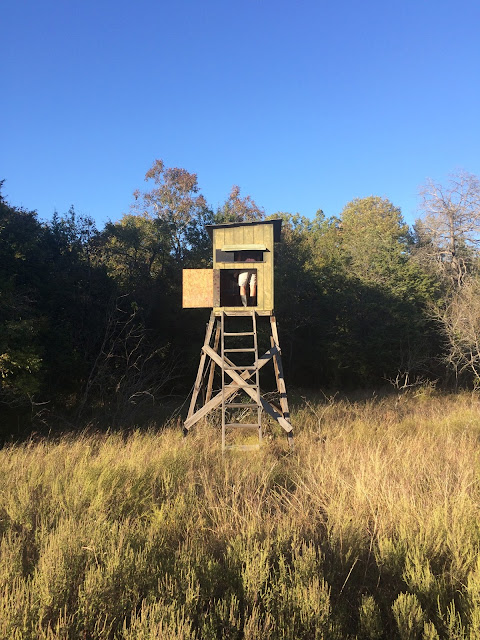 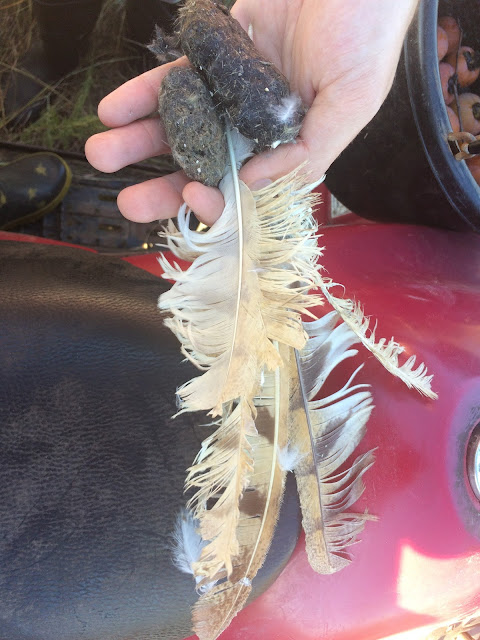 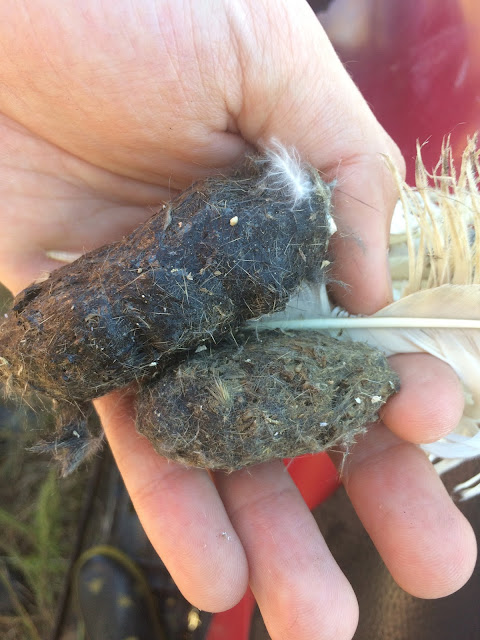 Having to move everything for the house painting gave us renewed interest in having a tidy up around the place. So when we had to move all the junk on the side of the garage, mostly ladders and old barbed wire from hay bales, some of it went straight into the trailer. By the time we eventually took it to the scrap metal place we had collected more things from around the property. 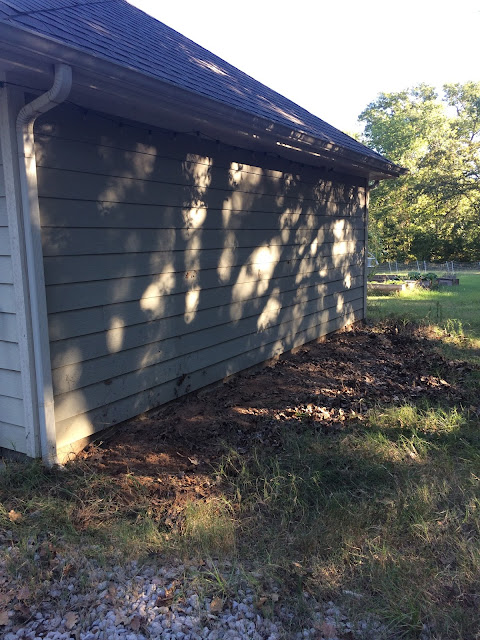 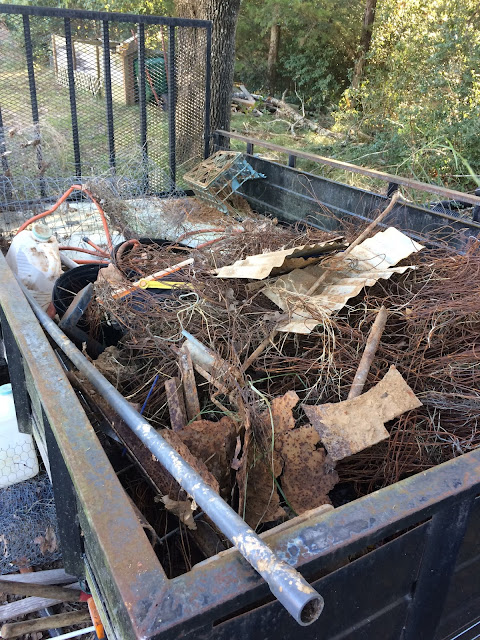 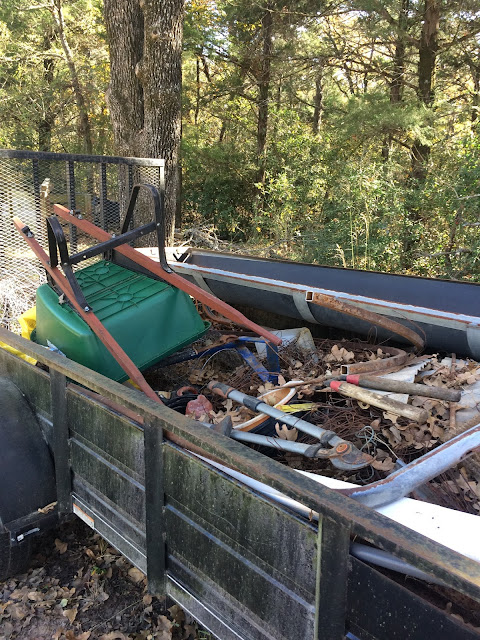 I don't even know where to start with this post. The saga began in August.

The outside of our house was getting very faded and in some places the exposed wood was beginning to rot. The time was well overdue to have the house painted. I don't think it had ever been painted since it was built around 2005.

Once I got the go-ahead from Guv'nor, I contacted three local painters. I've always heard you should get three quotes. I knew nothing about the first one. I had seen a sign on the road with a phone number. The second one had done some painting for us when we did the remodel soon after we arrived. The third one was a recommendation from a neighbor. I eventually contacted all three.

The first one came as planned, arrived on time, and did not get lost. We communicated easily, he seemed confident he could do all the work, and he gave us a thorough handwritten estimate. Sounded too good to be true. (This is why you get three estimates.)

The second one came as planned, didn't get lost because he lived just down the road. Unfortunately he wasn't as easy to communicate with and admitted he couldn't do part of the job (replacing rotting wood trim, treating the wood deck). I had to ask for a written estimate and he jotted down some numbers on a scrap piece of paper. The numbers were at least double from the first, plus didn't include the entire job.

The third one didn't work out. When I tried to contact him, we could not communicate at all because of a language barrier. He never followed up and I lost interest.

So, it's not a big surprise that we went with the first guy. He did give me a few references, which all turned out positive.

By the time we got on his calendar, it was mid-October. So there's no real excuse why we hadn't done our homework better on paint colors. We knew what we liked: the original house color that we had seen when we first saw the house six years ago. But even then, it was probably already beginning to fade. To our eye, the house color was always a shade of green. So we began looking at greens on the Sherwin Williams color wheel, and chose one called Clary Sage. We also had to choose a trim color (Dover White)  and a deck color (Mahogany).

The painter arrived on the scheduled day, nice and early, and caught me off guard. He was clearly ready to get started. He quickly started pressure washing, which meant all the outdoor furniture around the house had to be moved. By me. Thankfully the Factor was here at the time and jumped in and took over. He even took down our Christmas lights (yes, we're those annoying people who keep their unlit Christmas lights up year round).

The next few days he caulked in the gaps and papered the windows. It was nice progress even with a couple of off days due to the wind or chance of rain. Soon after he had the trim painted and had started in on the house color and got about 3/4 around the house.

When the weekend rolled around, Guv'nor had his first chance to see the house color in the daylight. I admitted freely that the color wasn't quite right, but I was happy enough with it. Guv'nor thought it was the wrong color, a bit too pastel looking, and suggested we get a few alternative sample colors painted on the unpainted section.

If you've never chosen paint colors, then you probably won't be able to sympathize with the rest of the story. So just stop reading right now.

We chose three more colors: Artichoke, Evergreen Fog, Austere Gray, and had a small section painted. It was about this time that we realized the colors in the paint wheel did not translate to the same color on the outside of our house. As it was explained to me, there are too many variables - paint types, surface texture, lighting, surrounding colors - all which affect the overall color. So it is essential to get samples painted on actual walls.

Artichoke was the color we decided on the second time around. It was a pleasant color, but one shade darker than Clary Sage on the color strip. I'm still not sure why we thought this was a good idea. Maybe that it would fade to the right color over time? The whole house got painted before we came to the sad conclusion that it was still not the right color. There was something wrong with the contrast between the darker green and the cream trim. It reminded me of a Christmas cookie. Maybe we should have just painted the trim darker. It's funny that you can quickly tell what is wrong, but much harder to tell what is right.

We could understand now why some people hire a designer to choose paint colors.

Thankfully we finally realized that the color we actually liked wasn't a green at all, but a gray. We just thought it was a green because that's what it looked like to us with the green tinted windows and the trees and grass around it.

I never would have guessed that we would painted our house gray. But here are the photos to prove it.

The Big Tex balloon was the best thing about this year's Cotton Harvest Festival, so I  thought I'd share it with you. 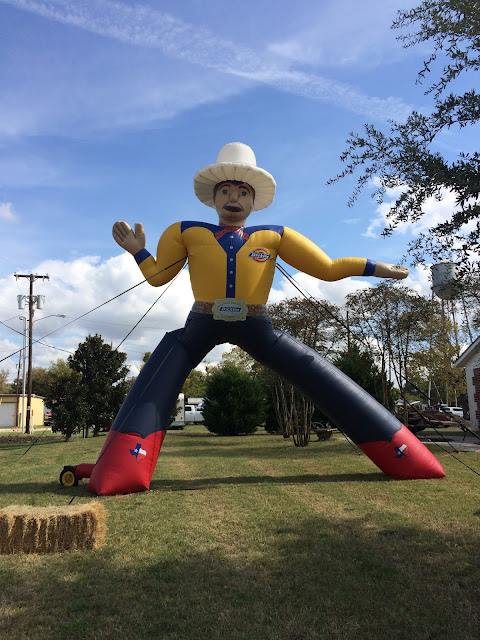 Somehow Lola, one of our Pyrenees dogs that guards the goats, got barbed wire tangled up in her tail. Not sure where the barbed wire came from, but she may have dug it up. I couldn't get her to stand still long enough to pull it out, so had to get help to get it all out. Thankfully it didn't cut her anywhere. 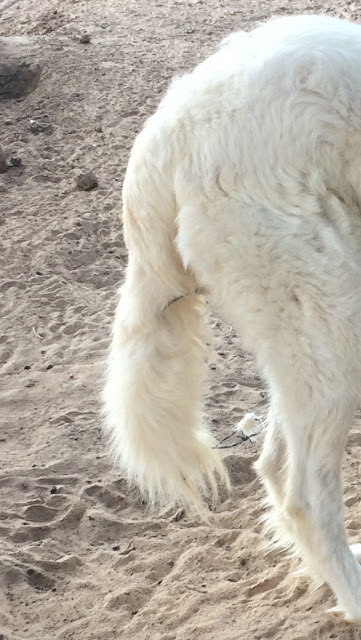 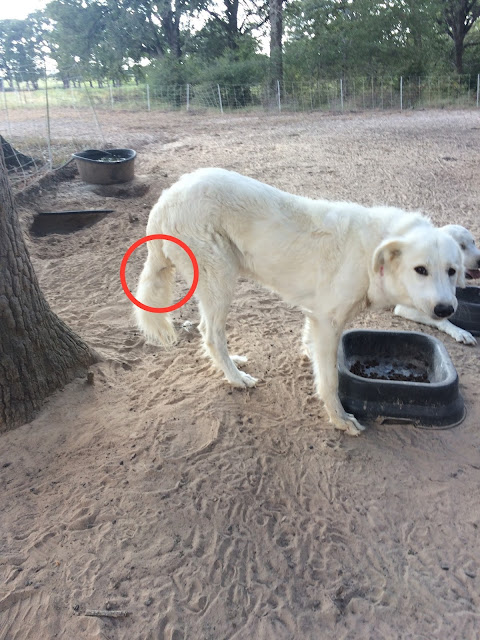 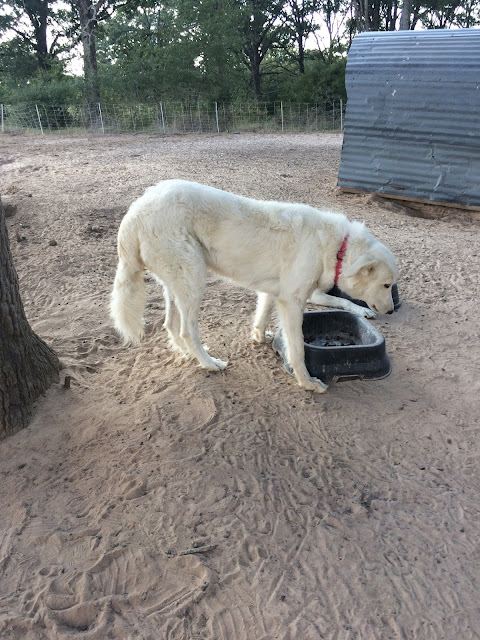 A few months ago I planted some carrot seeds in the hydroponic planters. I had been wanting to experiment using the hydroponic system to sprout seeds because the timed water system would give them a better chance. Carrot seeds are tiny! I had to use tweezers to be able to pick up a few at a time.

I gave them about six weeks and once they got a few inches tall, I transplanted them to the raised beds. I tried planting carrots in the hydroponics before, but it just didn't seem like enough room for them.

So far they seem to be growing well. 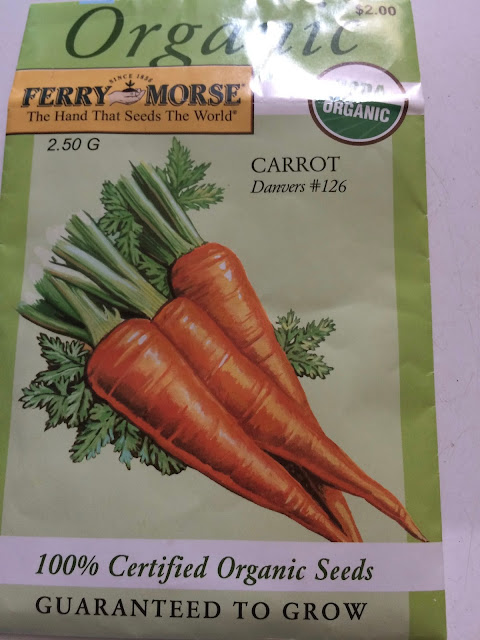 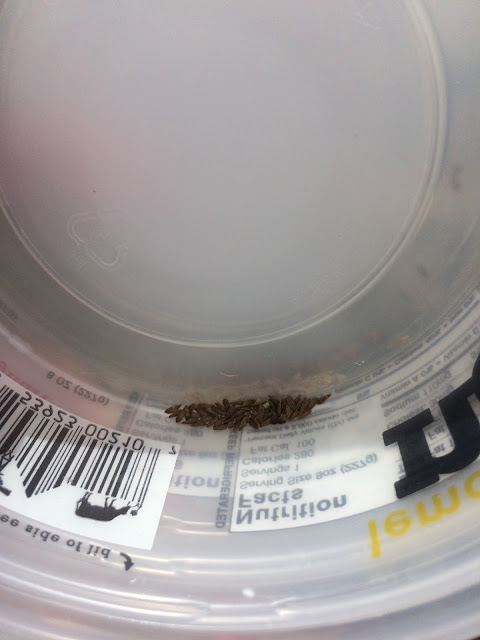 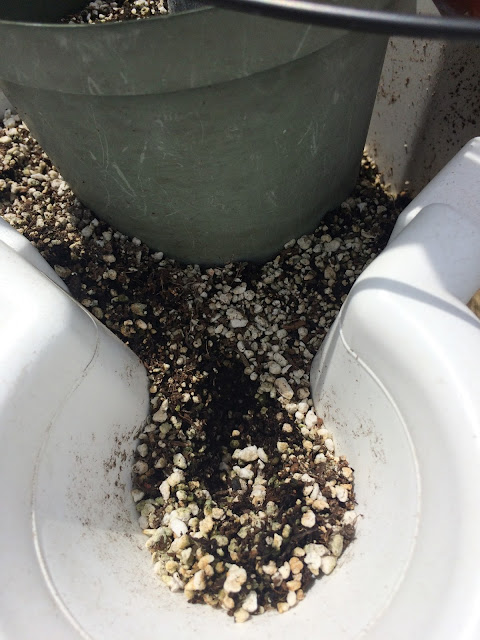 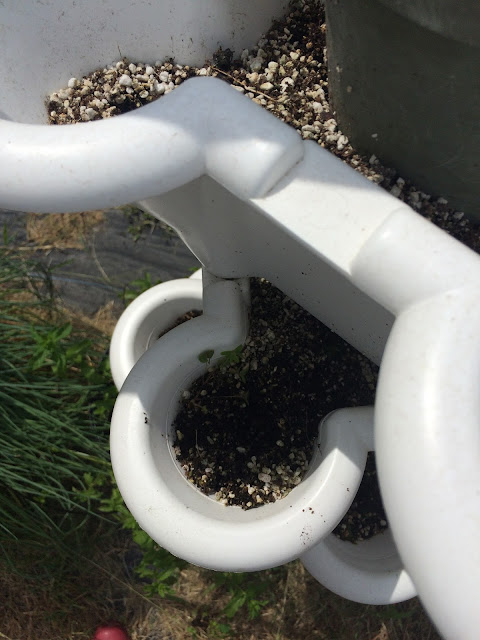 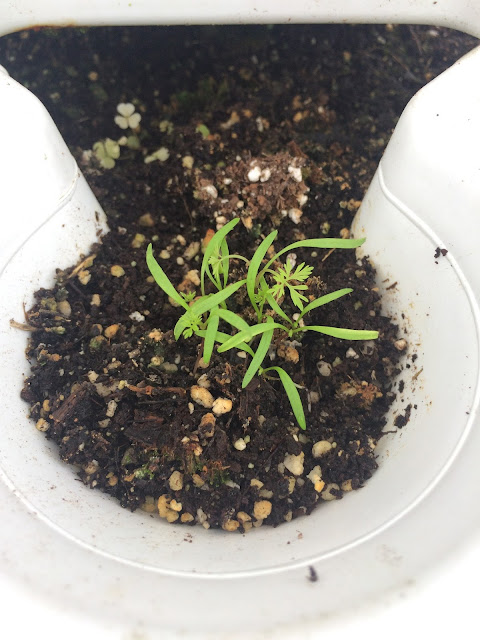 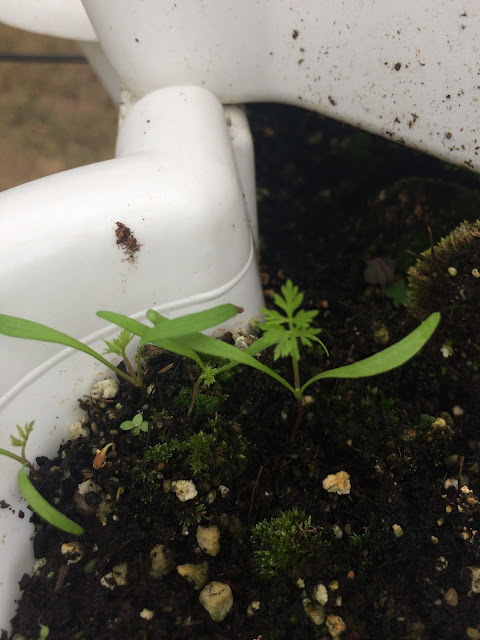 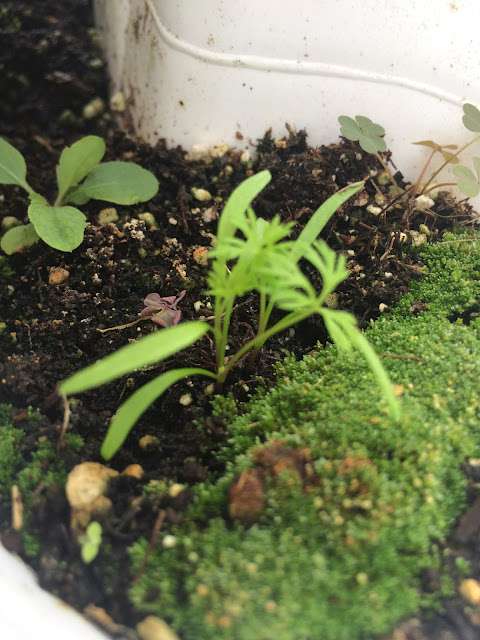 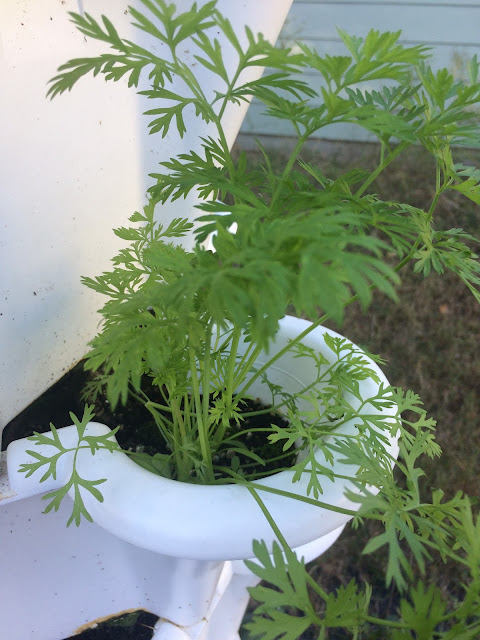 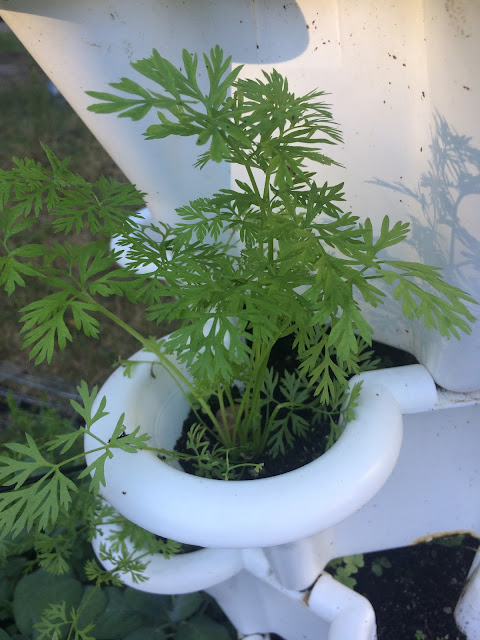 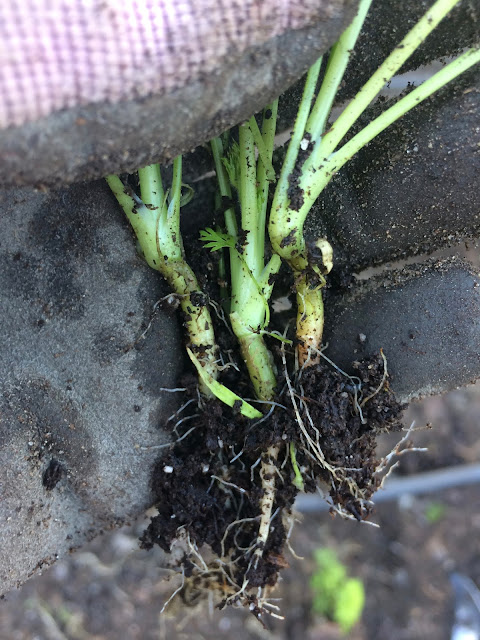 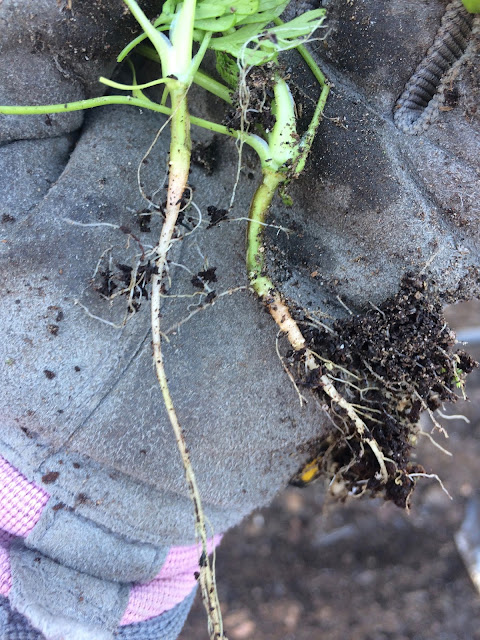 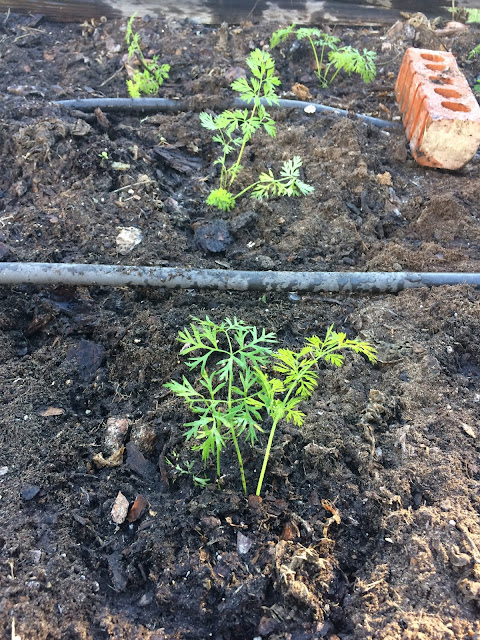 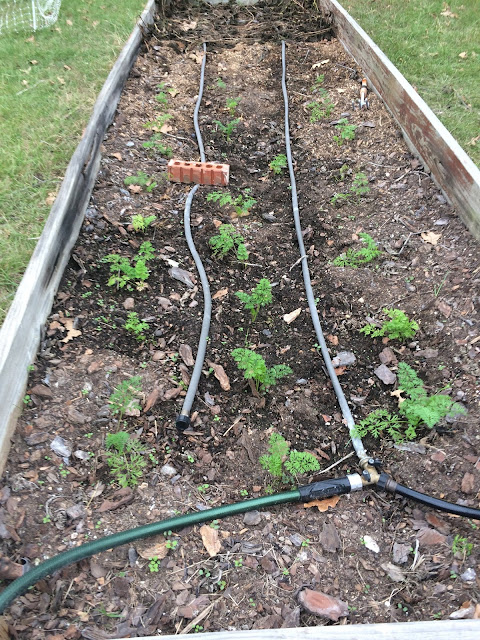